A DD bra size is closer to normal than you might think. A large majority of women think they are an A–D cup, even if they clearly aren’t. It’s been drummed in to us over the years through magazines, TV and general advertising that a a bra DD+ and anything above is a very large cup size. Nip back to the 60’s and you’d be right but women’s body shapes have been expanding in many ways over the decades. High street shops simply try to get you to by what they want you to buy. Supply and demand. If A–D is the bra cup size the fashion buyers believe most women to be, then that’s what’s stocked, aside from the cost of holding potentially slower moving DD bra sizes.

If there’s no demand for larger bras they won’t stock them, even if there is, or clearly should be a need. The same goes for band sizes. The secret is to get fitted properly. Until we all get fitted properly (remember that surveys have suggested that 80% of British women are wearing the wrong bra size) a wider range of sizes will remain difficult to find in many stores. Specialist lingerie boutiques offer great fitting services and on-line lingerie stores publish many handy DIY bra fitting guides to point savvy consumers in the right direction. Lingerie boutiques and online lingerie retailers are also going to be the obvious choice for a wider selection of alternative sizes.

We’ve been taught to believe that a DD bra and anything above it is ‘massive’. Frankly, that is rubbish! Because bra cup size is relative to the back band, the DD bra size of a woman with a 32 or 34 band is nothing more than what could be described as a ‘good handful’. The cups don’t look huge, they just look big-ish. It’s proportional. A 34 DD bra size is the equivalent of a 36D and going up another band size a 36D is equivalent to a 38C. Or perhaps the other way around a 34 dd bra size is the same as a 32 E. This is described as sister sizing. Larger stores also look at aesthetics. On a hanger small cup lingerie is perceived to look more appealing and delicate, leaving larger sizes relegated to the back of the rail or on request from the stock room.

I’ll be honest with you, I am a 34F. I have varied in size quite considerably over the years and like most women I’ve probably worn the wrong size bra on more than one occasion. Sometimes I look at an F cup on the hanger and it just gives me absolutely no idea of how good it is actually going to look on. My husband was the first to comment that big bras just don’t have the same appeal when displayed on the hanger, which is why some department and specialist lingerie stores don’t really display a lot of their stock, preferring to bring suggested bras and lingerie into the fitting room or order in specific larger bra sizes on demand.

For me and many others there is nothing worse than visiting a lingerie store and finding nothing in my size. It’s one of the reasons why I was keen to become a lingerie retailer as it has opened my eyes to a whole new world of lingerie that I would probably have never found before.

Don’t be scared of finding out your TRUE bra size and there is no such thing as normal when it comes to our boobs. It’s normal to be all the things you think you are not in most cases. And don’t be fooled by a lot of the high street stores who let you believe that all desirable and comfortable designer lingerie stops at a double d bra size!!!

p.s Just as an example, DD bra size really has little meaning without the back size. (Thanks to Boob or Bust for the image). Click here to take a look at our DIY bra fitting guide. 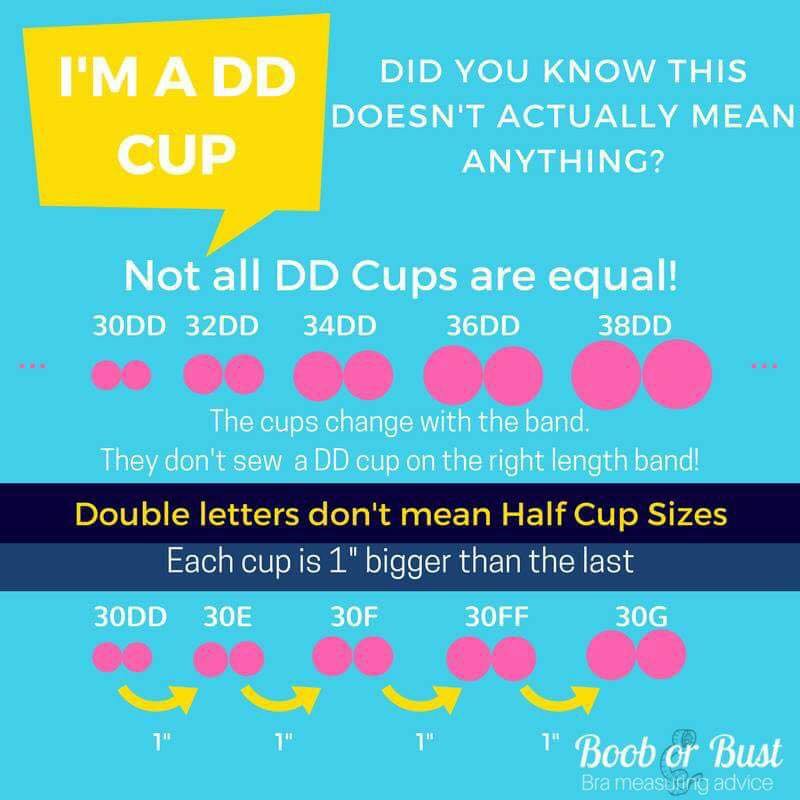 Products In This Article